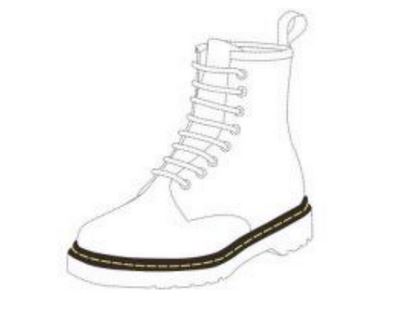 44. The Office considers that acquired distinctiveness has convincingly been proven by the defendant. The evidence provided shows Dr. Martens prominent presence on the Benelux market for decades. The evidence also shows the consistent use of the contested trademark. It is clearly shown that the yellow stitching is widely recognised as the identifying feature of the boots, as is illustrated by the overwhelming amount of press articles that were submitted by the defendant, in which it is referred to in terms such as “characteristic”, “famous”, “typical”, “striking”, “distinctive”, “recognizable”, “classic” or “iconic”. The status attributed to the stitching in these publications illustrates its position in the market, demonstrating that it is being considered as a sign showing that the boots originate from a particular company. It is clear that a simple and basically non-distinctive element such as a (coloured) stitching applied to shoes does not easily obtain such a status. This can only be the result of very long and intensive use, extensive marketing and efforts to promote the trademark - in other words, the “ingredients” for acquired distinctiveness.

45. The different results of the market surveys submitted by the parties do not give the Office cause to question the acquired distinctiveness. The mere fact that the results differ so much is already an indication that not too much weight can be attached to them. It is also difficult to compare the surveys. The questions asked are completely different, so it is not surprising that the answers are too. In any event, the Office agrees with the defendant's criticism (paragraph 30 above) to the extent that the percentage that was mentioned by the claimant (34%) of the respondents who answered Dr. Martens to the first question, still appears quite high given the very open-ended nature of that question. The question posed in the survey submitted by the defendant seems more appropriate and the resulting percentage (63%) therefore also appears to better represent the actual market situation. The Office also notes that both surveys have the shortcoming that they only concern the Dutch market, whereas according to established case law, acquired distinctiveness should cover the entire Benelux territory1 . However, since it is clear from the documents submitted that the long and intensive use made of the mark took place in a highly comparable way throughout the full Benelux territory, that omission does not give rise to doubts. Given the nature of the trademark, the Benelux consumer is highly comparable in all areas and the effect of the marketing efforts made is therefore comparable as well. This would be different if this case would for example involve a word mark in a language that is not spoken in the entire Benelux.

49. With regard to (iii), the claimant argues that the appearance of a shoe will play a decisive and important role in the purchase decision. According to the claimant, the current trend of wearing lace boots also prescribes the stitching is made visible. The look of the Dr. Martens lace boot will be the primary consideration for buying the shoes, which includes the yellow stitching on the applied black welt. Thus, the appearance of the boots will give substantial value to the goods. The Office agrees that for the goods in question, their visual appearance will undoubtably play an important role in the (potential) consumer’s purchase decision. However, what is being claimed by the contested registration is not the visual appearance of the boots, which has been “disclaimed” by using dotted lines and by the description (paragraph 2 above). The trademark is a position mark and its subject concerns a well-defined element, namely “the combination of a black welt (Pantone 19-3909 TCX) that runs along the perimeter of a boot's outsole and a yellow stitch (Pantone 3965 XGC) applied to the welt in the manner as shown”. The claimant fails to substantiate – and it is, again, also difficult to see – why this specific element would intrinsically, so without taking into account the attraction acquired through the use of the trademark, be attractive to such an extent that it must be considered to give substantial value to the goods.